In the previous chapters, we discussed how bitcoin is a new form of currency and a way of transferring value between people. Now that we understand how bitcoin works, let's see how it actually fares against other forms of currencies.

Ideally, money must possess the following seven properties to be truly efficient: durability, portability, divisibility, uniformity, stability, scarcity, and acceptability. Does bitcoin actually have all the necessary properties to be called money?

Money has to be durable in the sense that it must be reusable over time.

For example, Pedro trades his watch for a bag of apples. If Pedro chooses to use the apples as a form of payment, it would be unlikely for other people to accept them because they are prone to rot in just a few days. I mean, who would want to trade for rotten fruits, right?

Unlike fiat and gold, bitcoin is built on cryptography. Bitcoin cannot be changed, tampered with, nor can it be destroyed. This means that every bitcoin can always be reused in future transactions, no questions asked.

Since transactions happen anywhere in the world, money has to be in the form of something that can easily be carried around by people. Bitcoin is definitely portable because it can be stored in digital wallets on any mobile device. All you need is an Internet connection. Spend any bitcoin amount anytime, anywhere.

Money must be divisible to be more effective as a medium of exchange, allowing more precise pricing of goods and services. Although fiat money partially achieves this with cents as its lowest unit, Bitcoin does so even more by making its smallest unit up to 8 units or 0.00000001. With this, items can be priced and paid for more accurately.

One problem for fiat money and gold in terms of uniformity is counterfeiting fake serial numbers, artificial production, or mixed metals. This isn't a problem for bitcoin due to the cryptography built into it.

Bitcoin's form will always stay constant. Nobody outside the network can create any other legitimate physical or digital form of Bitcoin.

Money has to be stable so that the value of goods and items priced in that currency can be referenced and determined easily for an extended period of time. Relative to fiat money, gold and bitcoin's value fluctuate more with bitcoin being one of the more volatile assets as of writing.

Money has to be scarce to prevent its value from changing due to supply and demand. Fiat money can be printed endlessly and is subject to hyperinflation. On the other hand, both gold and bitcoin are scarce assets given their limited total supply.

The main difference between gold and Bitcoin's supply is that while gold's supply is scarce, its total supply is unknown.

There might always be more gold than we think there is in the world. Bitcoin's supply, however, is strictly capped at twenty-one million. No one can change this.

Being the youngest form of currency among the three, Bitcoin still has relatively limited adoption and acceptability around the world compared to fiat money.

However, adoption has been growing lately with names like Microsoft, Twitter, PayPal, Visa, Mastercard, and Etsy adopting the digital currency.

Of what we just mentioned, Bitcoin beats fiat money and gold in five out of seven properties, falling short in just stability and acceptability. These five winning properties of bitcoin are already engineered into the protocol. No one can change them even if they want to. This makes bitcoin a trustworthy and reliable form of money.

What's left is for Bitcoin to check off the two remaining properties—stability and acceptability—which are only a matter of time.

One way to stay updated with bitcoin's progress as a form of money is to monitor it through on-chain metrics. For now, we will be discussing Non-Zero Balance, Exchange Balance, and Transfer Volume.

It is important to note that on-chain metrics DO NOT include activity on exchanges like Binance, PDAX, coins.ph, Kucoin, nor other Bitcoin applications such as the lightning network. 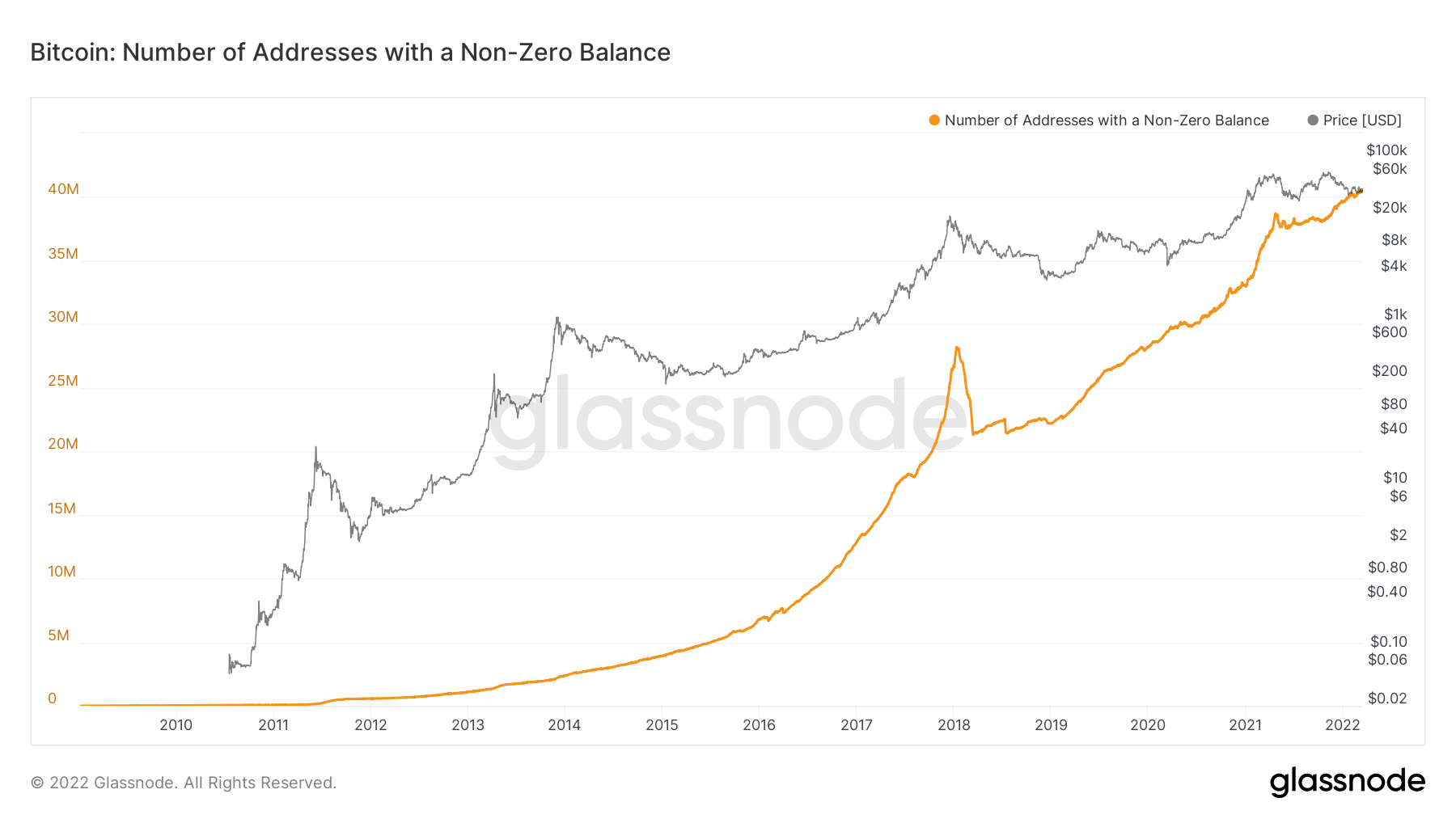 Number of Addresses with a Non-Zero Balance

This metric shows how many Bitcoin wallets in the world actually hold any amount of bitcoin greater than zero. This is a great way to check Bitcoin's adoption because an increasing non-zero balance would imply more people are holding and using bitcoin.

As you can see in the chart above, the number of wallets greater than zero has been in a macro uptrend for the past decade! 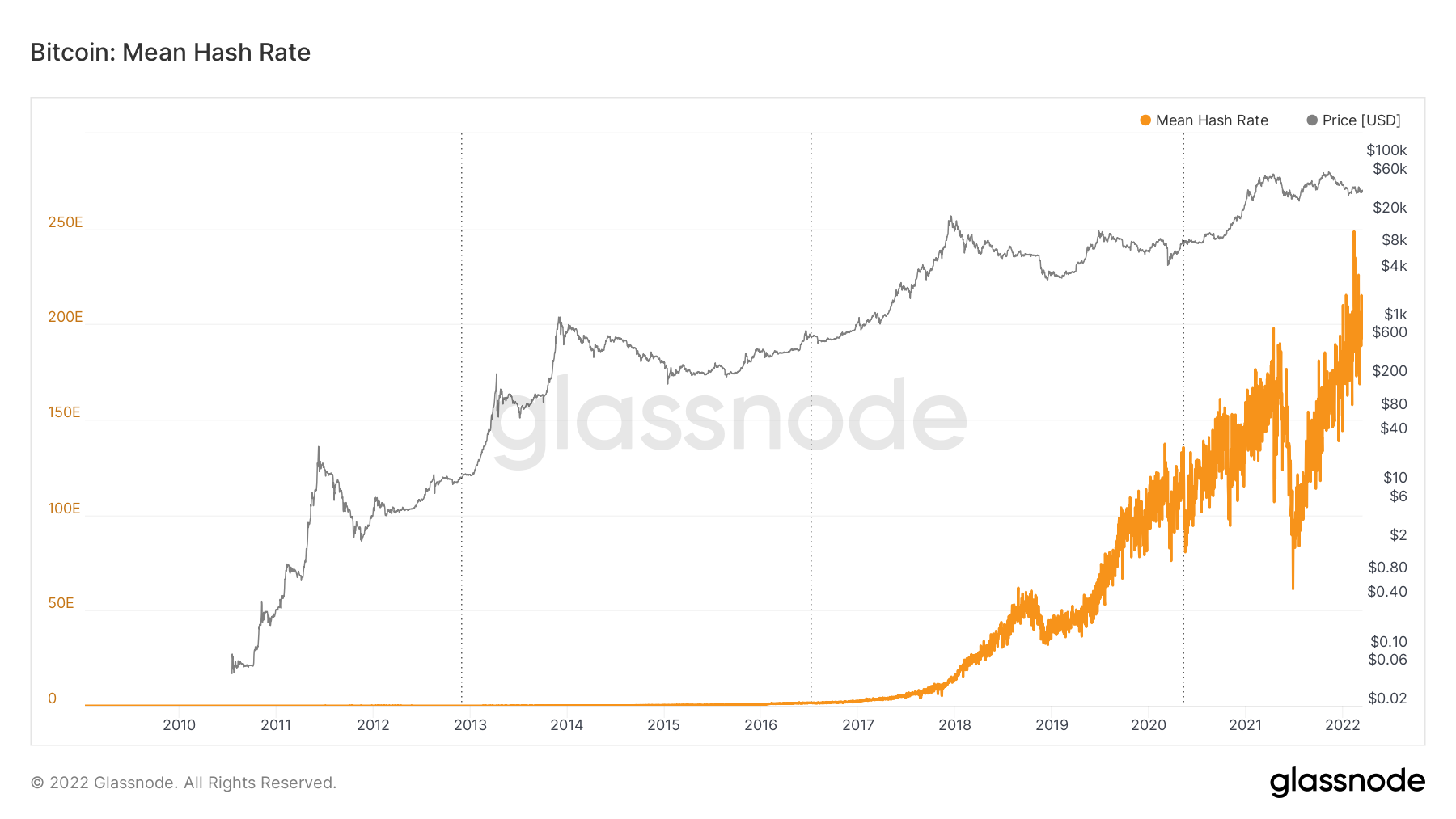 The mean hash rate measures the mining activity in the Bitcoin network. It represents the number of calculations done per second to verify blocks.

Similar to the number of addresses with a non-zero balance, we would also want the Bitcoin mean hash rate to increase since this signifies more security and decentralization in the network.

Over time, the hash rate has been exponentially growing because of more miner participation around the world. This trend has been upward since Bitcoin's inception, with no signs of stopping.‍ 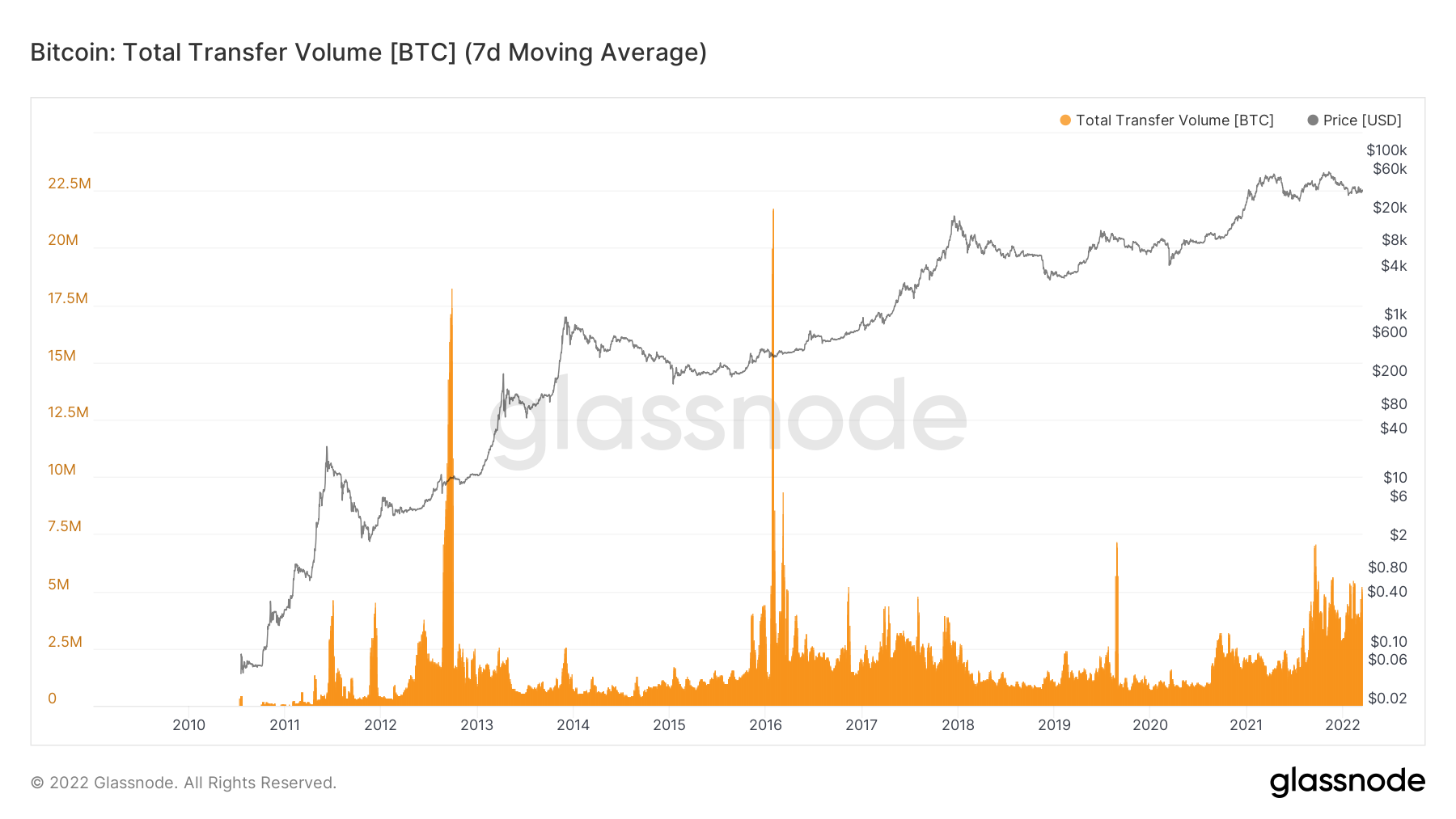 Don't let all the terms confuse you. The Bitcoin total transfer volume is just a record of how much bitcoin moved from one address to another in a specific timeframe.

Looking at the chart, we can see how the Bitcoin network transfers millions of dollars worth of bitcoin daily. That's massive for a decade-old currency!

By looking at just these three on-chain metrics, we can already get a general picture of Bitcoin's growth as a form of money over the past decade. But of course, it's also essential to look at other real-world developments like El Salvador and the Bitcoin Lightning Network. 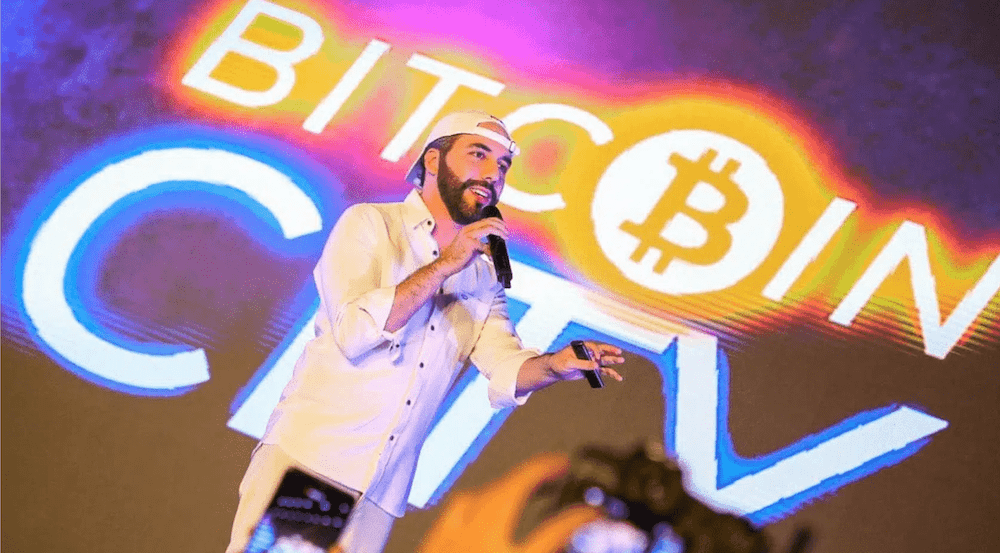 Nayib Bukele, the president of El Salvador, recently announced that it will be adopting Bitcoin as one of its official currencies alongside the U.S. Dollar. This move by El Salvador's government made history by being the first country in the world to officially adopt Bitcoin as legal tender.

Why did Bukele decide to do this?

It's because remittances are one of El Salvador's major economic problems, and remittances make up a fifth of the country's GDP. The problem is that citizens in El Salvador have to face high transaction costs every time they send money from other countries. Current remittance infrastructures available bite away from a chunk of what El Salvadorians should be taking home.

Remittances in El Salvador account for roughly six billion USD — that's almost as big as the entire GDP of Guam.

In addition to that, 70% of the country's citizens do not have access to traditional financial services due to a lack of documentation or infrastructure available. Nayib Bukele saw Bitcoin as a solution to these problems, allowing any El Salvadorian to send money quickly, efficiently, and affordably.

As of writing, a third of El Salvador uses the bitcoin wallet Chivo for their daily transactions. Nayib Bukele also stated that the wallet now has more users than any single bank in El Salvador.

Now that a country has adopted a cryptocurrency as legal tender, it wouldn’t be a surprise to see the rest of the world follow suit in the future.

The Bitcoin Lightning Network is a layer two solution initially ideated by Joseph Poon and Thaddeus Dryja back in 2015. The lightning network was created to solve Bitcoin's scalability and transaction time concerns.

A layer two solution refers to a framework or protocol that is built on top of an existing blockchain, like Bitcoin.

These layer two solutions focus on improving on the blockchain they were built on in terms of security, scalability, or decentralization. 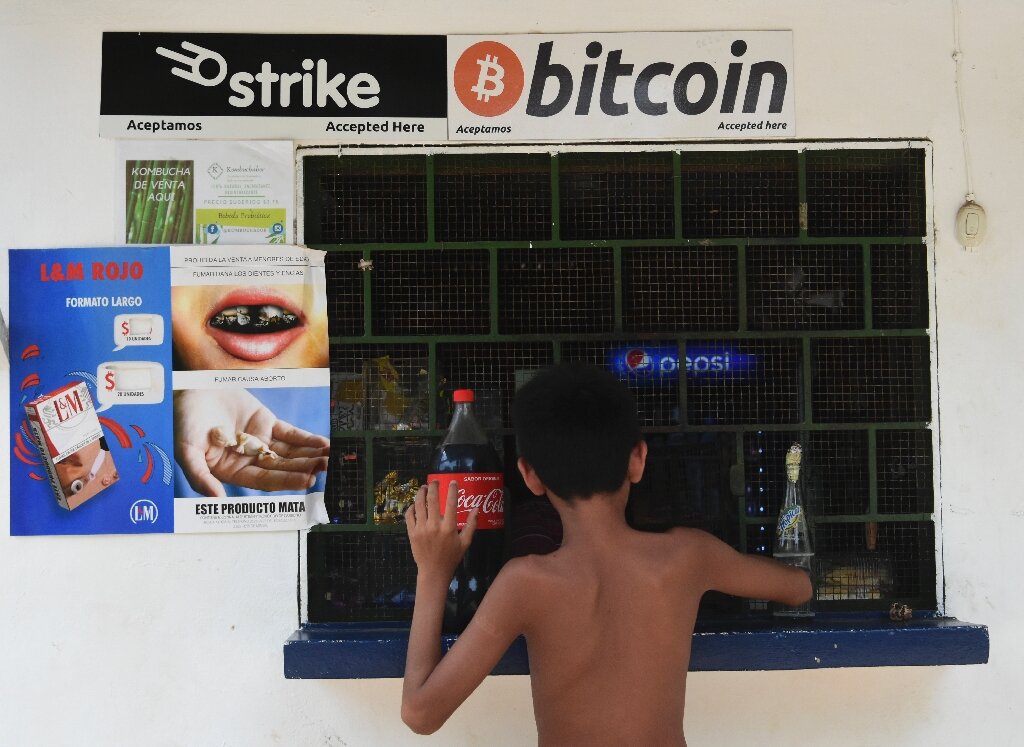 The Bitcoin Lightning Network has seen exponential growth recently, increasing by a whopping 46% over the past two months in 2021. The Bitcoin Lightning Network is also a huge reason why Bitcoin's legalization in El Salvador works. The network allows for micropayments between citizens, barbers, coffee shops, retail stores, and ice cream vendors — all in a matter of seconds. 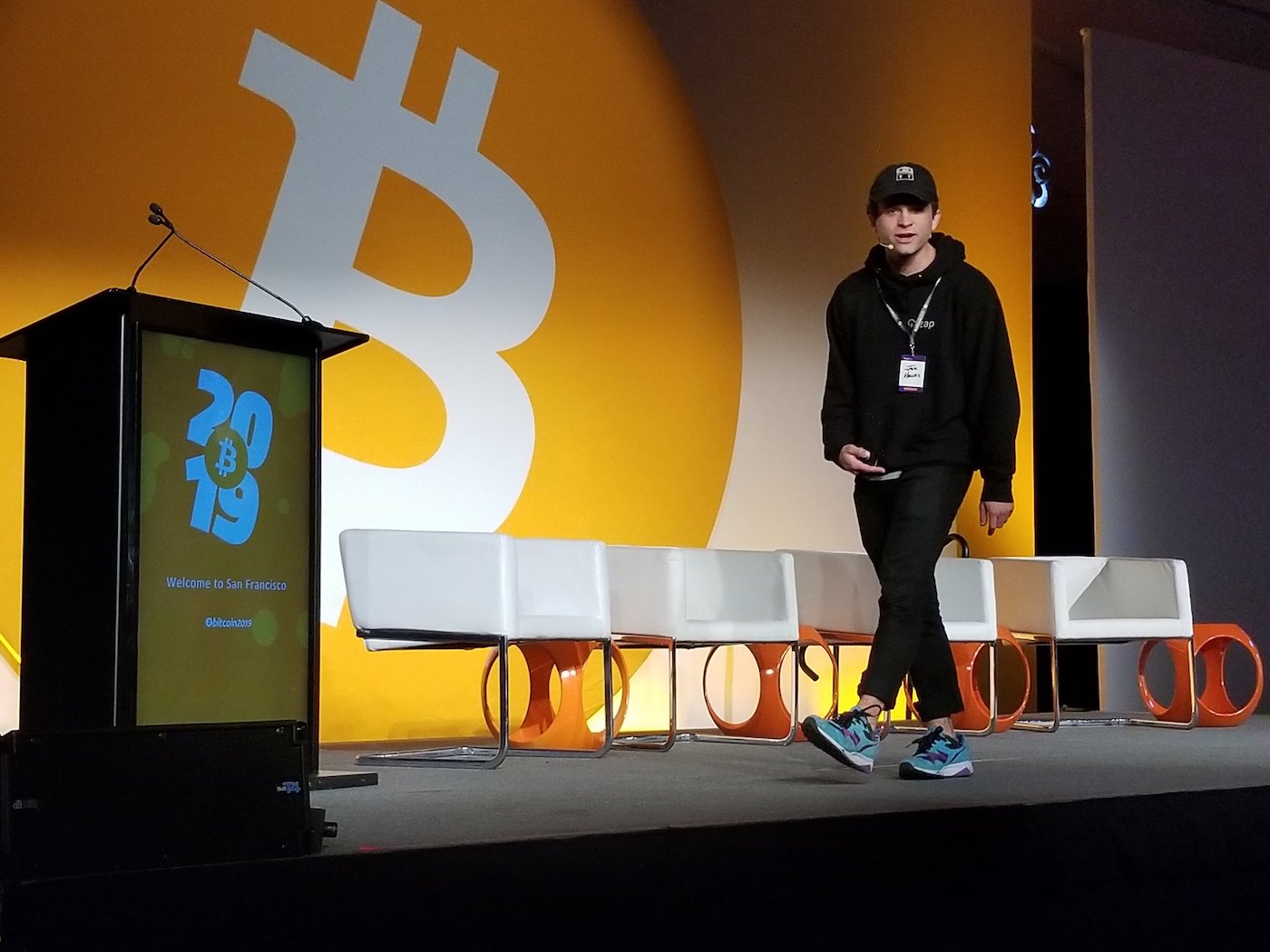 On September 23rd, Jack Mallers of Strike announced that the Bitcoin Lightning Network would be integrated on Twitter. This integration allows any profile to send bitcoin to any other profile worldwide for virtually no cost. Twitter is one of the largest social media platforms to date, with a user base of 206 million people as of 2021.

This may be a great way to compensate people for content, donate to charity, support a cause, or anything like that. But beyond that, this just goes to show the endless possibilities when it comes to the lightning network.

Bitcoin can be used to skip all the intermediaries in traditional finance such as Western Union or PayPal — taking out the need for hefty fees, lengthy wait times, and excessive amounts of documentation.

Overall, Bitcoin is a promising contender to the traditional forms of finance we have been using for the past centuries. Progress and modernization are essential for the world to keep turning, and it’s due time for money. Bitcoin is here to redefine how finance is done, and Bitcoin's journey has only just begun.

Aside from the monetary properties we just mentioned, you'll be surprised to find out what other problems Bitcoin solves. Head on over to the next chapter to find out.

Did you enjoy this read
on
Properties of Bitcoin
?
👍

Aside from being a reliable form of money, Bitcoin also helps solve several problems that affect you, me, and everyone else in the world. Some of these problems include trust systems, authorization, and transparency. Let's take a quick look at what these problems are.